Industrial Catalysts contributes significantly towards our society’s green initiative by boosting energy efficiency in production processes and increasing productivity. This has a knock-on effect on reduction of greenhouse gas emissions (GHG) and waste.

As per “The Technology Roadmap "Energy and GHG Reductions in the Chemical Industry via Catalytic Processes" jointly developed by International Energy Agency (IEA), the International Council of Chemical Associations (ICCA) and DECHEMA, “the manufacture of 18 products (among thousands) from the chemical industry account for 80% of the energy demand in the chemical industry and 75% of the GHG emission. Catalysts and related processes improvements could reduce the energy intensity of these products by 20% to 40% as a whole by 2050”. (link)

Catalysts Europe believes that industrial catalysts will be a key element in the EU pursuit to be the  first climate neutrality continent of the world by 2050 and to reduce emissions by at least 55% by 2030 compared to 1990 levels. The ambitious targets of the Green Deal will be impossible to achieve without harnessing the capability of industrial catalysts in enabling novel chemistries. More about the Catalysts Europe’s contribution to the Green Deal can be read here.

Below are some examples of how industrial catalysts are supporting industry’s sustainability efforts:

Plastic waste in the world's oceans has increased significantly in recent years. A plastic bottle tossed in the recycling bin may end up being shredded and reused to make a sweater or a carpet, but it won’t be turned into another water bottle - at least not so far. Mechanical, rather than chemical, recycling is used for polyethylene terephthalate, or PET, because it’s still too expensive to break the polymer down into its chemical parts. Currently catalysts are being developed by international researchers to make it cost-effective to break down PET plastics into their constituent chemicals for reuse as bottles.

Climate protection measures, such as technologies to decrease CO2 emission and to maximize energy efficiency, the set-up of a circular economy and de-fossilization of the chemical raw material basis are applications for chemical catalysts. An increasing momentum in politics, society and industry can be observed to accelerate the process of CO2 reduction and to promote alternative fuels. Off-gases from steel production, for example, contain carbon monoxide (CO) and carbon dioxide (CO2), the components of so-called synthesis gas. Catalysts help to produce synthesis gas of high purity from industrial off-gases, which can then be turned into synthetic fuels or other higher-value downstream chemicals. Overall, reducing energy consumption and CO2 emissions is an important point.

Unique catalytic processes are currently being developed to convert ethanol to synthetic paraffin kerosene. In the first plants, this had already been converted to pilot scale by the laboratory. If the ethanol is obtained from biomass in these applications, you have "green aviation fuel". 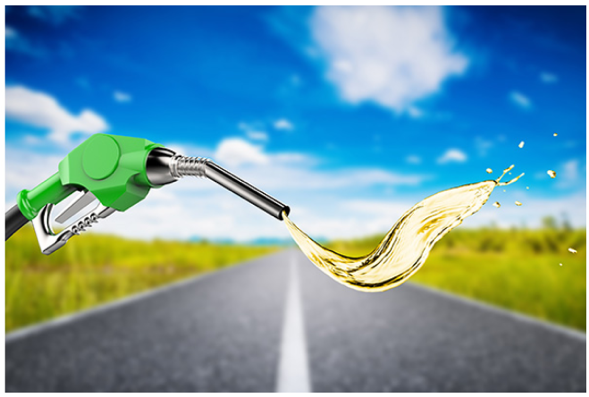 See examples provided in the webpages of member companies.