Catalyst are substances that increase the rate of a chemical reaction

Catalysts are substances or mixtures, including solid, liquid and gases, that increase the rate of a chemical reactions  without itself undergoing permanent change. Catalyst are vital to the chemical industry. They allow the efficient production of many chemicals and are used in a vast range of industrial applications including fine chemicals, refinery operations, edible oils, pharmaceuticals and polymers. Specific applications include the reduction of environmental emissions and the production of low sulphur fuels. Europe is a leader in catalyst technology.

Catalyst will be vital to achive the goals of the green deal. Industrial catalysts will be a key element in the EU pursuit to be the  first climate neutrality continent of the world by 2050 and to reduce emissions by at least 55% by 2030 compared to 1990 levels. 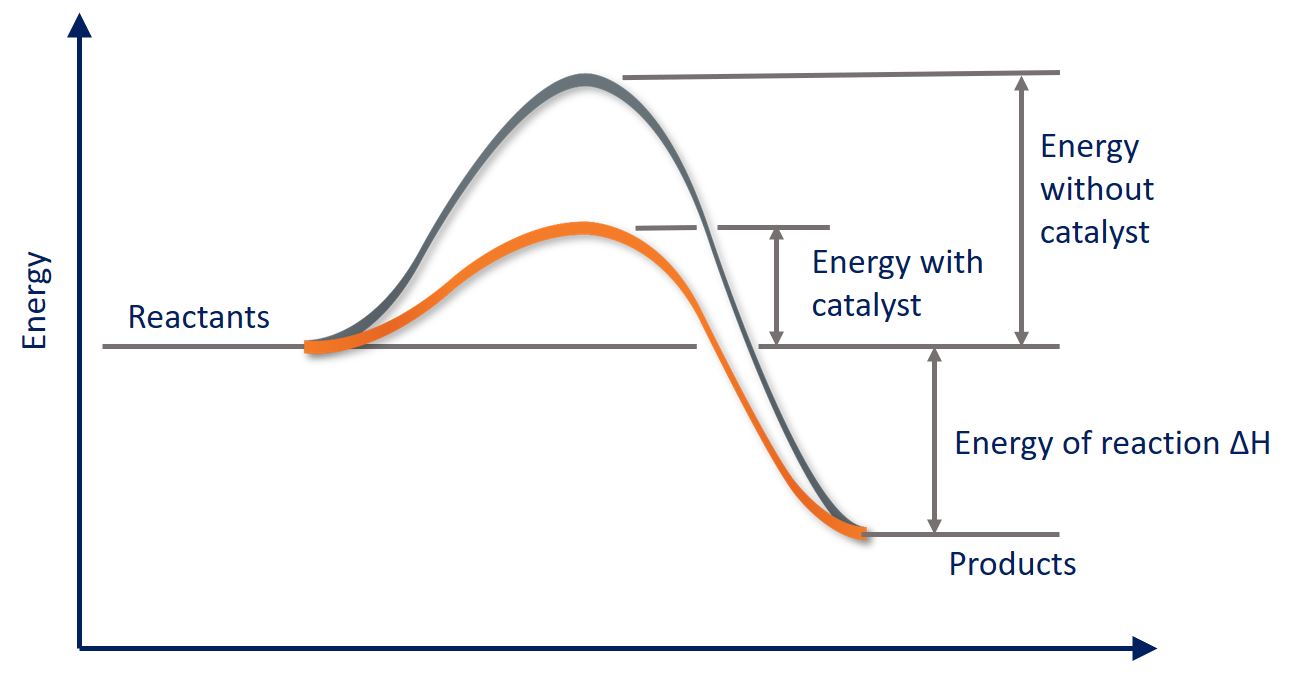 Graph:  Showing the reduction of required energy for a chemical reaction when using a catalyst for a particular reaction.

Important factors in catalyst design include selectivity and yield, poisoning, corrosiveness, ability to be recycled as well as the availability of materials. Optimising catalytic effects requires a thorough understanding of a wide range of chemical phenomena and is a highly specialised science.

There are two basic types of catalysts:

Homogeneous
For a homogeneous catalyst holds that the reactants and the catalyst are in the same phase, generally in solution. The catalyst is usually recovered from the final product stream by a process such as distillation. It is the reused until the catalytic activity is no longer sufficiently high. Often the raw catalyst material is supplied as a powder and the catalyst needs to be dissolved in an appropriate solvent before the catalyst can be utilised.

Heterogeneous
For a heterogeneous catalyst holds that the reactants (normally liquid or gaseous) and the) catalyst (normally solid) are in different phases. The pellets may be spherical, cylindrical, or randomly shaped. Many catalysts used in heterogeneous processes are extremely complex. Normally they consist of a number of principal components on an inert support material such as aluminium oxide or silica. When these solid catalysts are handled, they may generate airborne dust and therefore may present a risk when inhaled.

How are catalysts made?

Catalyst manufacture is a complex process normally carried out in specialised facilities. Solid heterogenous catalysts with metals are typically manufactured by impregnation or precipitation on the support in liquid phrase followed by thermal processing (calcination) to strengthen/bake the catalyst.